2019 APD Scholarship Winners Seven students will receive $1,000 scholarships and two recipients will receive $500 scholarships. These scholarships were funded through several anonymous benefactors, the Spring Fling fundraising event, community donations and with the partnership of the local Annapolis Papa John’s Pizza. An anonymous donor gave the scholarship fund $5,000 and asked that five scholarships be given in memory of Gerald Fischman, Rob Hiaasen, John McNamara, Rebecca Smith and Wendi Winters. The five people killed in the attack of the Capital Gazette offices in June of 2018 Leonardo Acosta earned a 3.67 GPA at Annapolis High School where he was a student in the International Baccalaureate program. Leo is involved with many activities both in the community and at school. He is a member of many clubs and often times serves a leadership role. Personal Finance Club, Student Government Association, and the Spanish Honor Society to name a few. Leo volunteers at the Centre de Ayuda and will complete an internship there this summer. The IB Counselor states, “Leo had to grow up quickly to deal with many life challenges. He did so without losing his own identity but held on to what he knows and loves, learning. He has held on to his self in the face of the storm.” Demetri Brownearned a 3.14 GPA at Annapolis High School where he took both honors and Advanced Placement classes. He is involved with numerous community service activities including serving meals at both the Salvation Army and the Lighthouse Shelter and participating in a coat drive for Sarah’s House. He is also an active member of his faith community and participates in many activities.Demetri participated in high school sports and was a member of the National Honor Society. His high school English teacher wrote, “One of the things that most stands our about Demetri is he has a heart of gold. He would be the first student to jump up and do anything to help a teacher, or a student, in distress.” Given in memory of Rob Hiaasen. Jameira Eadesearned a 3.57 GPA at Annapolis High School where she was enrolled in many honors and Advanced Placement classes. Jameira served as a member of the Superintendent’s Teen Advisory Committee representing the CAT South program. She tutored students in the AVID program and participated in community service for the Lighthouse Shelter. Jameira worked as a part-time page for the Anne Arundel County Public Library. The Branch Manager at the library states, “Jameria has been reliable, dedicated, and engaged taking all of her work and assignments seriously. She has excellent communication skills, asks great questions, and displays thoughtfulness and professionalism in all she does.” Given in memory of Gerald Fischman. Christopher Hernandezearned a 2.81 GPA at South River High School where he was enrolled in the rigorous STEM magnet program. He is a member of both the National Honor Society and the Chinese Honor Society and took numerous AP courses. Chris works as a Junior Staff member at the Boys and Girls Club of Annapolis. He is always willing to help other students and has participated in many extra curricular activities and programs. Chris is involved in a mentoring program called Joven Noble. A teacher and Family Involvement Specialists states, “Chris’ academic accomplishments are rivaled only by his personal strengths. His academic resilience, dedication and justice are beyond his years and he is well-loved by his peers.” Given in memory of Rebecca Smith. MiKayla Simmsearned a 3.18 GPA at Annapolis High School where she was a member of the National Honor Society, French Honor Society and numerous other clubs including the Key Club, Young Women of Color and Mock Trial. MiKayla was selected as the Boys and Girls Club Youth of the Year where she will serve as an ambassador for all teens in Anne Arundel County. Her school counselor at Annapolis High School wrote, “MiKayla is a capable student leader with a warm heart who cares deeply about the world around her. She radiates enthusiasm and life, and brightens the world through philanthropy and humanitarian action.” Given in memory of Wendi Winters. Sidra Tahirearned a 3.84 GPA at Annapolis High School where she was a member of the Naval Junior Reserve Officer’s Training Corps Unit (NJROTC). She has participated in many extracurricular activities and community service projects where she often served in a leadership role. Sidra participated in the AVID program where she also served as an AVID tutor for other students due to her organizational skills and work ethic. The Senior Naval Science Instructor said, “Sidra approaches life with a level of self-discipline, that I rarely see in someone of her age. At the same time, she clearly enjoys life and its adventures, and everyone enjoys being around her.” Cameron Thomasearned a 2.92 GPA at Annapolis High School where he took both AP and honors classes. He was a member of the National Honor Society and played both football and lacrosse all four years of high school. His high school math teacher states, “Cameron demonstrated strong character as well as academic integrity. He is neither afraid nor flustered when he makes mistakes, but instead takes them in stride and learns from his errors. “ Given in memory of John McNamara. $500 Scholarship Recipients: Kaysha Addison and Nijae Beckles 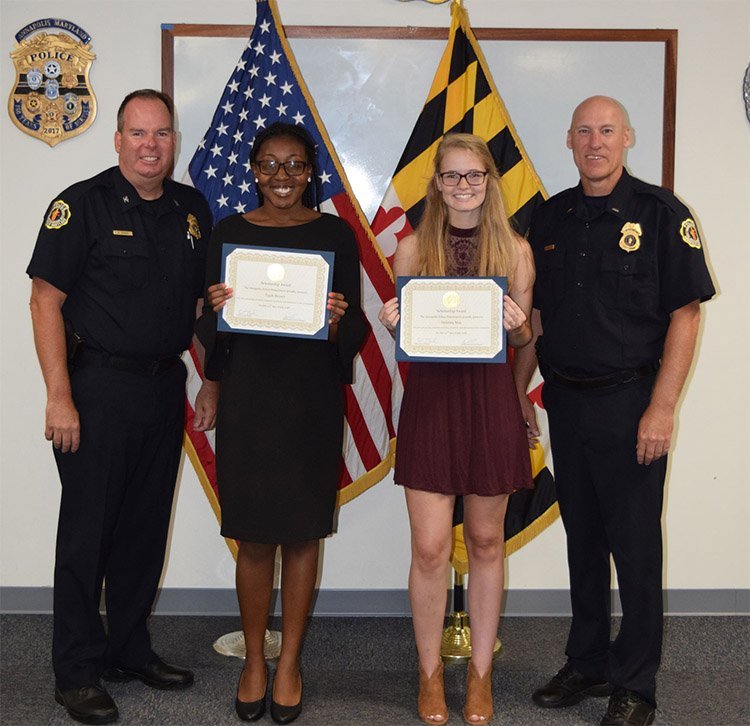 We are proud to honor two students from the City of Annapolis with our second year of scholarship awards. In 2017, in honor of our 150th Anniversary, the Annapolis Police Department established a scholarship to be awarded annually to a City of Annapolis resident who is a high school senior. The Annapolis Police Department recognizes the importance of higher education and is pleased to announce two deserving and hardworking scholarship recipients. Each recipient will receive a $1,000 scholarship. These scholarships were funded through community donations and with the partnership of the local Annapolis Papa John’s Pizza. Tyjah Brown earned a 3.19 GPA at Annapolis High School where she was inducted into the National Honor in 2016. Tyjah volunteered at the SPCA of Anne Arundel County performed community service at local parks and the Lighthouse Shelter. She has been an employee of the Boys and Girls Club since 2015. In 2018 she was nominated for the Boys and Girls Club National Youth of the Year. Tyjah will attend the University of Maryland Eastern Shore. She would like to major in Education or Social Work. Her Art teacher Ms. Pendleton states that, “Tyjah demonstrates great personal and academic maturation.” Delaney May earned a 3.97 GPA at South River High School where she was enrolled in the rigorous STEM magnet program. She was involved in numerous clubs including the Technology Students Association, Key Club and STEM Advisory Board. She was a STEM mentor intern at the Wiley H. Bates Boys and Girls Club, mentored elementary school students at Centro de Ayuda’s Leadership and Learning Program and tutored at a homework club at Edgewater Elementary. Delaney was also a member of the following honor societies; Sociedad Honoria Hispanica, the N National Honor Society and Mu Alpha Theta. Her high school counselor wrote, “She is a driving force in the school and the community who sets an example by her work ethic and leadership.”

2017 - 150th Anniversary Scholarship Winners Announced In honor of our 150th Anniversary, the Annapolis Police Department is proud to honor three students from the City of Annapolis with our first ever Scholarship Award. The Annapolis Police Department recognizes the importance of higher education and is pleased to announce three deserving and hardworking scholarship recipients. Each recipient will receive a $1,000 scholarship. We were able to fund three scholarships, instead of our goal of two, through community donations and with the partnership of the local Annapolis Papa John’s Pizza. Champagne Hunt earned a 3.23 GPA at Annapolis High School where she played softball and was involved in the Links Leadership program and member of the National Technical Honor Society. Champagne maintained perfect attendance and was enrolled in the Honors Dental Assisting program at the Center of Applied Technology. Champagne is committed to her community. She volunteers at the Boys and Girls Club of Annapolis and is a homework helper at the recreation centers. Champagne is the first female in her family to attend college. Her school counselor from Annapolis High School states that “This goal oriented young lady realized that she had a greater purpose in life. When life got her down, she got back up. When doors were closed, she found a way to open a window. She knew there was something bigger than her in the world and she is going for it.” Jamar Turner earned a 3.43 GPA at Annapolis High School where he was enrolled in the rigorous International Baccalaureate program. He was involved in numerous clubs including the National Honor Society and the Student Government Association. He volunteers his time and energy throughout the community including the Lighthouse Shelter, Relay for Life, and the Winter Relief Program at Mt. Zion Methodist Church. His high school counselor wrote, “If you are lucky enough to meet this young man you will find a personable, charismatic, intelligent leader. His compassion for others shows in everything he does.” Daniela Marciano earned a 3.92 GPA at Annapolis High School where she participated in indoor track and spearheaded the formation of new clubs and furthered the mission of others. She founded a Drunk Driving Awareness Program in collaboration with the Anne Arundel County Police and Fire Departments. Daniela brought new ideas to the Key Club and the organization flourished under her leadership by going from 20 members to more than 50. Daniela transferred from a high school in North Carolina to Annapolis High School her junior year. Her high school counselor wrote, “It did not take Daniela long to stand out amongst her peers. She quickly became involved in the school community. Not only joining but bringing new ideas and a willingness to do the work to make them happen.” 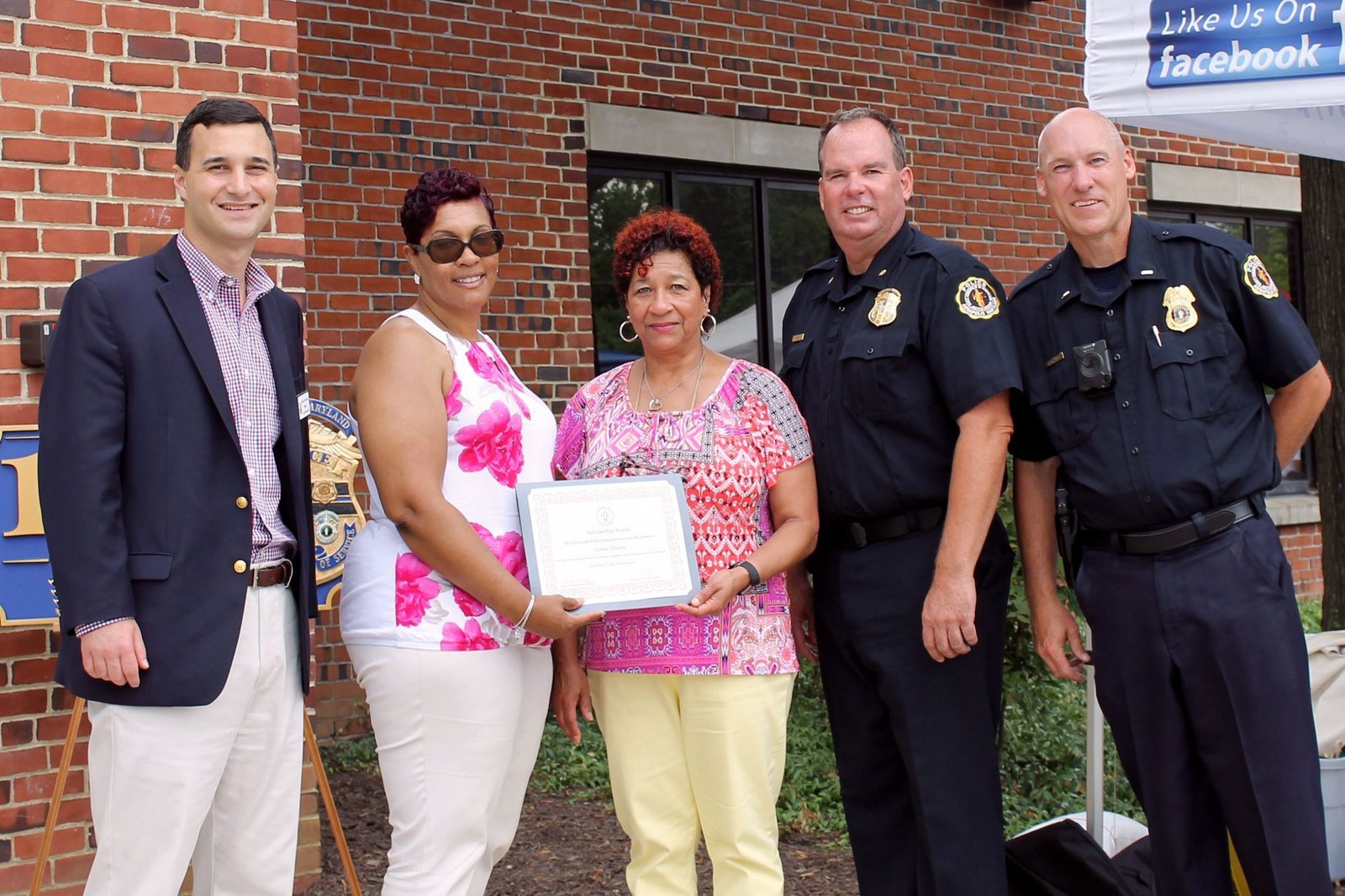 The scholarship award will be submitted directly to the school in the name of the recipient. The scholarship is non-renewable, not transferable and will expire one calendar year after date awarded.